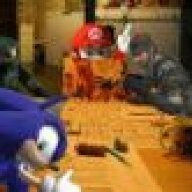 Hey all, so today I'm finally getting around to reviewing a game I've been wanting to review for a while. To be honest, this is also something of a "discipline review" to try to get myself into the habit of writing more, so I hope you don't mind if you end up seeing a bunch of reviews of uninteresting games and stuff from me while I work through the game I REALLY want to review. These "discipline/practice reviews" are also to help me develop and refine the format and style of my reviews, so I would really appreciate any feedback you have on that. Thanks!

So anyway, with that said, on to the review!

Fable III
Xbox 360 (2010)
Developer: Lionhead Studios
Publisher: Microsoft
Genre: Action RPG​
There are many in the gaming community who seem to be perpetually disappointed in the Fable series. What with Lionhead CEO Peter Molyneux's constant hyping of each entry in the series before release, it's hard not to be. But how much of a disappointment is the latest in the series, Fable III, and why? Let's investigate!

Fable III is more of a direct sequel in the series than its predecessor was to the original Fable. Your character is the child of the hero from Fable II, who had ascended the throne of Albion after defeating the evil that plagued the country. However, after the previous hero's death, your older brother Logan takes the throne and becomes a vicious, autocratic dictator of a king, driving the country into poverty and showing no sympathy for the people he is repressing. After forcing you to make a fateful decision, you and your loyal butler and trainer decide that enough is enough. It's time for a revolution!

At that time you also discover that you are the one who is destined to inherit the power of the Hero of Albion from your famous parent. With this newfound power in hand, you flee Bowerstone Castle and begin to gather supporters for your rebellion. Your task in this game is to gather enough supporters to overthrow your brother and become the new ruler of Albion!

Actually, the story itself is probably one of the least potentially disappointing things about it, especially once you do overthrow your brother and are forced to make even more difficult decisions as the new King or Queen. Given the circumstances the country is in, these decisions are even more trying if you want to do right by your subjects. It puts a whole new dynamic into the classic good vs. evil aspect of the Fable series, and if you are playing to be the most good or evil you can be, it leads to some unique endings that as someone who has a B.A. in politics, I can certainly appreciate. I can't really find any big issues I have with this aspect of the game.

Graphically, this game doesn't really have too many issues. I did experience some stuttering from time to time during gameplay as things loaded.

Oh, speaking of loading, the load times in this game are horrendous. If you're going to be visiting Bowerstone city often (and you will), I would recommend using the load times to get a snack or visit the restroom. Not that the game throws you too many threats or things to take notice of if you just let your character stand there, but that's an issue for the Gameplay section.

The posters are amusing, but after the 1000th time, it starts to get old.​
I find the aesthetic of this game to be considerably brighter than the other two installments, and I mean that literally. It's like everything in the kingdom is made out of mirrors, reflecting sunlight or torchlight everywhere. While it's going for a cartoony storybook style, the glistening sheen covering everything doesn't really lend itself well to that. Though I do have to say that I enjoy the steampunk-Victorian style brought to this stage in Albion's history. But hey, I like steampunk.

It's a cave! Where in the hell is all the sunlight coming from?​
The characters also tend to look like they're made of plastic, making it a bit harder to suspend disbelief and "get into" the world. Another thing with the characters is that although more has been done to try to get players invested in characters' individuality, it really didn't work. The "extras" in the game still look far too similar. Pretty much the only truly unique thing about each character is their name. The fetch quest and date aspect of the friendship and romance systems doesn't really add much to the sense that you're really just "romancing" a cardboard cutout.

But I can't leave this section without commenting on the voice acting, which includes the vocal stylings of such British celebrities as John Cleese and Stephen Fry. The voices are a nice addition, and add a lot of... well... character to the major players in the story. At least this time, appropriate attention was given to the major characters, even if the extras were still neglected for the most part.

The gameplay is a mixed bag in Fable III. I'm going to break it down in to combat and non-combat aspects.

The combat is more of the positive aspect of gameplay. I enjoyed the combat quite a bit, actually. Like in other Fable games, you use a different type of weapon depending on the button you press, and you can use any of the three available (melee, gun, or magic) at any time. Switching among the three is very fluid, making it easy to pull out what you need to handle any situation. Magic is still somewhat overpowered, however, meaning that there is less incentive to use the other two kinds of weapons.

Speaking of things being easy, this game is just easy all-around. I was able to make it through the entire story in my first playthrough without dying once. And of course, like other Fable games, all you get for dying is a small, barely noticeable scar and you are back on your feet in a second flat.

Another good aspect of combat this time around, however, is the ability to power up your weapons based on different tasks to be completed based on the character of the particular weapon you use. Each individual weapon also has a distinctive look to it as you level up each style of combat, which is a nice touch. Another nice touch is the ability to combine two spells to make unique effects with which to lay waste to your enemies.

And just like everything else in this game, it's shiny.​
[HEADING=3]Non-Combat[/HEADING]

This is where the game really disappoints, aside from the decisions you are given as King or Queen. Like with other Fable games, you can play mini-games to work and build up money, but it just, well, feels like work. I'm sorry, I thought I was playing this game to get away from work! But really, you'll only be working enough to get yourself your first property. Then you can use the profit made from the rent on your other properties to buy new ones and you'll have all the property in the game in no time.

Building relationships is greatly changed in this game. Now you interact with each individual person one at a time instead of pulling wacky hijinks in the town square and all-of-a-sudden having everyone from the most sophisticated noble to the lowest bar wench madly in love with you in three presses of a button. The addition of the fetch quests and dates to improve each person's relationship with you only makes building those relationships more tedious than they have to be. The spirit of building more personal relationships is appreciated, but Lionhead went about this in entirely the wrong way.

As for unlocking all the things you can do, it's different from last time. Now, instead of experience orbs for general use and each style of combat, you collect Heroes' Guild seals which you use on the Road to Rule to unlock the treasure chests containing the different abilities and levels. This streamlines upgrading your character, but having every single upgrade in the game derive from a single source kind of removes your own personal development from the world around you, if that makes any sense.

Speaking of, this has always been a problem with the non-story/combat aspects of Fable. Why do any of this? Why should we care about going around and owning all of the property or having a different wife in all the areas of the kingdom? I understand that the novelty of it can be intriguing, but after three times doing the exact same type of thing, it starts to get old. We need a reason to care about doing this!

Well, there is one very good reason to care about doing one of these things, but I shan't say any more lest I spoil the ending for you. But with everything else, it all just seems so trivial. I wish there were more care put into making me care about it.

In conclusion, I find that the main reason Fable III seems to be such a disappointment is that there hasn't been enough done to differentiate the non-story aspects of this game from its predecessors. The actual story of the game and the concept of being the ruler of Albion are decently done for once, if short, but instead Molyneux continues to talk up the fact that you can become the richest property magnate in the country and have sex with anyone you want if you build the relationship enough. Well, we were able to do that in the previous two games, too, but that process has only gotten more needlessly difficult over time. That's not exactly a good thing.

At the end of it all, there's enough good to this game to recommend playing it if you have a weekend to kill. It'll only take you that long to really get through the story. It's a decent game, but in the end there is nothing about it that makes it a must-play, especially if you have played either of the previous two. In the future, I hope there is more effort put into any next installment to truly make it a unique, stand-alone game and make us care about the world we are saving.

A good review here, although I think the picture spacing could do with some revision. Space them out a bit more as having two that close together makes it feel a bit cluttered, in my eyes. As for grammar and formatting, couldn't spot anything right away, although later on I may give it a proper going over.

As for what I think, well it is a good game if you've never played a Fable game before as you don't need to know what happened in the first two. But if you've played the two before it, it does feel like a let down. I personally felt it was a reskin of Fable 2, with a new story and that shitty "Touch" system. Anyway, as I said before, a good review, keep it up.

Also, Simon Pegg is Ben Finn and I didn't know that til I blundered across it on his Wikipedia entry. XD 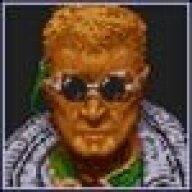