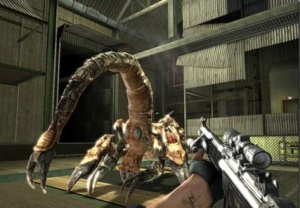 Developer Tragnarion Studios has licensed Unreal Engine 3 for a new cooperative first-person shooter codenamed "The Scourge Project." Four players can play together, while each individual follows a different personal story.

Carl Jones, head of Tragnarion Studios, chose the Unreal engine because it lives up to its promised standards. "We've been amazed at the speed and quality of results on Unreal. We've only had the engine for a couple of months, yet we've already been able to build a great-looking, fully playable prototype, which we'll soon show to publishers, featuring our innovative narrative system for multiple players and our unique co-op focused game play mechanics. Every single feature we want is easily implemented in Unreal - for all the major high-end platforms."

Epic Vice President Mark Rein said, "When we saw the demo that Tragnarion produced, we were really impressed with the progress they had made in such a short time. The high quality visuals, innovative game features and co-operative story have come together in only a few months. It made us very proud to see how quickly they were able to learn Unreal Engine 3 and we can't wait to get a look at this title again in a few more months."

And what "innovative game features" would those be?

The premise isn't new but has been largely underdeveloped. It remains to be seen how a 'different personal story' translates into game mechanics - a rigid selection of levels for each player who made a choice at a crossroads, or a dynamic gameworld where each player must carry out different objectives possibly running parallel or contrary to other players?

I'd enjoy seing the latter but wouldn't be too surprised if it were the former.
G

Automatic Meat, as I was reading this, my ideal interpretation of what they're saying ran right along with your preference. I've seen other non-videogame interpretations of scenarios where groups are designed to work as teams, but one member is identified as the saboteur, and given contrary objectives. Typically, if the saboteur is outed, the saboteur loses. If the team succeeds without outing the saboteur, the saboteur loses. The saboteur gains a giant bonus for successfully thwarting the teams objectives, without being caught. Another style is to put a set of rules together where cooperation is optional (there is a reward, from the enemy, for defection/sabotage/etc, but the offer is made to all players). If all players cooperate and complete the objectives set before them, all share equally in the reward. If only one member defects, they receive some larger reward, which is reduced (sometimes to 0) if more than one person defects.

In a co-op, story-driven, FPS environment, I just don't see how that could work. I want them to prove me wrong, but there seem to be insurmountable hurdles.

Something that seems like it COULD work, is multiplayer co-op, where each player is given (as you say, parallel) intersecting objectives. Not all objectives are shared, and rewards for each vary. Heck, now I'm starting to describe something that game theory experts would absolutely LOVE to have as a testing bed for their theories.