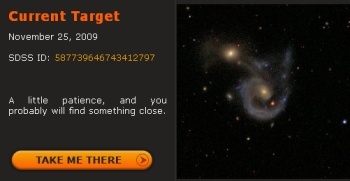 Astronomers in the U.K. have come up with a new web-based game that they hope will help them determine how galaxies actually merged.

Galaxy Zoo 2 shows players an image of a real galaxy and then asks them to match it to one of eight other images created by a simulation, with the intent of determining which simulations produce the most accurate results. The astronomers are enlisting the aid of the general public because people are "much better than computers" at spotting patterns and similarities in the images and by employing them in large numbers, they're more likely to get an accurate result.

"The strength of the game is that it takes results from many people," said Dr Chris Lintott of Oxford University and a member of the Galaxy Zoo team.

The game is actually a followup to an earlier Galaxy Zoo project which launched in 2007, asking members of the public to help find and identify different types of galaxies in a series of images. Lintott said that effort was a "victim of its own success" as participants came up with 3000 "fantastic images" of merging galaxies, far more than the project could ever simulate on its own. As a result, Galaxy Zoo has developed this new game so the public can help sift through those images in greater detail.

Determining which simulations of galactic collisions produce the most accurate results is important to unlocking the secrets of the universe because the events themselves take far too long to observe directly. "These collisions take millions of years to unfold," said team member Anthony Holinchek, a graduate student at George Mason University. "All we get from the universe is a single snapshot of each one. [With] simulations, we will be able to watch each cosmic car crash unfold in the computer."

This isn't the first time that astronomers have used games to put the public to work on their behalf; NASA recently unveiled a galaxyzoo.org [http://www.escapistmagazine.com/news/view/96215-New-Online-Game-Lets-Kids-Map-Mars].

This makes me nostalgic for Elite now.

This looks fun and educational. I like astronomy anyway.

It needs a mascot.

grimsprice said:
It needs a mascot.
Click to expand...

What about EInstein? He has loveable hair.

Anywho, I've been trying this out for the last 30 minutes or so. Its fairly interesting, and I've seen a few odd things on some of the photos - and it might be that I'm the first human to ever look at them. Nice.

They need an iPhone version if they REALLY want to tape into the collective passtime time.

I thought it already had one? [http://brokehoedown.files.wordpress.com/2007/04/beaker.jpg]

not a mascot, but instead, a shirt:

seriously though, you can use Science in a sentence like that and it will make sense.

Sounds like a great idea, I'm going to try it out now and find out for myself. I'm still unsure of how they plan to use the general public (a quite unpredictable, largely ignorant public) to help them. But I feel some optimism coming on, so I'll indulge.

It's good thinking, really. At the most basic level, any game is but a puzzle waiting for somebody to solve it out of boredom. Got a bunch of astronomical data laying around that needs interpreting? If you can figure out a way to present it in an entertaining manner, the Internet will beat a path to your door to help you sort it out.

As for scientists' idea of mascots, replace the typical concept of a mascot with a several mile wide particle accelerator.

not a mascot, but instead, a shirt:

seriously though, you can use Science in a sentence like that and it will make sense. 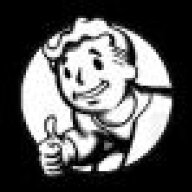