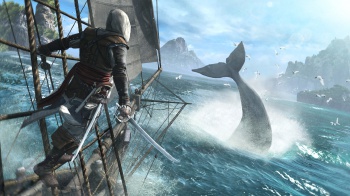 "DLC" has come to be an almost "dirty word" in the gaming industry, because while there are quite a few developers who use it responsibly, with appropriately priced expansion packs, there are way too many "wolf skins" [http://www.escapistmagazine.com/news/view/130466-Change-Call-of-Duty-Ghosts-Dog-Into-a-Wolf-For-2] that can leave a sour taste in gamer's mouths. However, Ubisoft VP of digital publishing Chris Early does not think this is the case, and says that most games have come to accept DLC, and certainly don't resist it like they used to.

Early, talking to Games Industry [http://www.gamesindustry.biz/articles/2014-07-03-gamer-resistance-to-digital-decreasing-ubisoft], about Assassin's Creed IV: Black Flag's "Time saver" DLC packs (which unlock resources and hidden locations in the game you can also earn through normal play), said that there the packs faced very little resistance from players. "There was no resistance," he said. "Maybe there were 12 guys somewhere who said something, but whatever. As a whole, there wasn't a problem."

In the past, gamers would complain that such "shortcut" DLC packs used to be available as free cheat codes, but Early says that those days are over as gamers have come to embrace their nickle-and-dime overlords.

"I think there are some models that are accepted now," Early said. "DLC is pretty much accepted. Season pass is pretty much accepted. Now it's interesting when you start to think of Season Pass as a Service Pass. For our Season Pass holders, I know we hold events for them specifically, so it's little bit more than just DLC content. So there's an evolution going on there."

So there you go. If you dislike the practice of developers shoveling DLC down your throat the moment a game goes live (or in some cases, even before that [http://www.escapistmagazine.com/news/view/119376-Pre-Order-Borderlands-2-DLC-With-Season-Pass]), you're in the minority (at least according to Ubisoft).

It all depends on how you go about it, Ubisoft. When DLC comes down to say, a brand new 2-4 hour campaign that you put a lot of time and effort into, people might not mind. When you put the equivalent of micro transactions, weapon skins, and heaven forbid content that is locked onto the disc, people still get upset. Don't automatically assume that everyone WANTS to pay 80+ dollars for a "complete" experience. Announcing a season pass before the game is released, knowing well it's content you could have waited to put onto the game itself, is always a grubby money grab.

Also, the fire in their kitchen brought on by their lazy approach to female characters has provided a great distraction.

Well, for one thing, acceptance isn't the same as approval. I'm actually someone who really doesn't mind most DLC even if I very rarely actually buy it. Actually, that's something I'm curious about. I'd like to know just how worthwhile it is for companies to delve so deeply into the DLC market. I'm guessing it must pay off but based on the communities I'm privy to, I really don't know of anyone who actually makes a habit of buying most DLC.

Because we've just given up telling publishers we hate it. We screamed for years about it, you fucking just did it anyways, so that's that. I stopped buying your games.

I think its just the gamers that were willing to pay for this shit have stuck around and bought their nickle and diming DLC. Others have left to play different games and wait for the actual complete version of a game they like 1-2 years later when they see it all on steam with DLC for like 20-40 bucks. I really can't remember the last time I've bought a game at launch which is almost entirely because of DLC. I mean you buy triple AAA games at launch these days and you are just begging to be ripped off by these shady asshole publishers.

I mean I don't think its coincidence that rise of DLC happens at the exact same time as the explosion of consumers looking for Indies to play or Kickstarter games to fund and free to play because those are more honest ways to sell your game. Also with the general acceptance of video games in the wider culture at large and it really seems to me more likely that Publishers have sacrificed so many potential sale with burnt out consumers has been offset by the entry of new ones into the market when they could of had both.

So then I'm to assume that when someone is knocked unconscious it's because they like being punched in the head?

I hope that Jim uses this to keep his Ubisoft Jimquisition train rolling.

remnant_phoenix said:
I hope that Jim uses this to keep his Ubisoft Jimquisition train rolling.
Click to expand...

Jim will never run out of material with the current state of triple AAA publishing.

Well Chris Early I think we'll be finding out just who those 12 people on the internet are.
Ubisoft's disregard for a small minority of overly complaining IGC members can only be applauded, after all look at all the dosh its made them.

Time saver DLC was something mentioned quite a bit there, and while its hated like the rest I actually think it can very well be a good thing. For example the older demographic tends to be wealthier in cash, but poorer in free time, time saver DLC helps them nicely.
I don't recall myself using it much as I'm not an old fogey...one instance was in a game called Cross Edge which I hated for several reasons, but decided to go back to two years later to platinum. Time saver DLC meant I absolutely crushed everything in the main story no problem and gave me a nice leg to stand on when it came to getting the post game stuff thereby saving me many hours.

I actually think DLC was more accepted when it first arrived compared to now. Therefore I find this statement rather amusing.
S

I've never had a problem with DLC, but I think that's because it means something different to me than what it's supposed to mean. To me, DLC is an expansion in the game's story. Dead Space 3: Awakening. Arkham City: Harley Quinn's Revenge. Mass Effect (pretty much all of them). Tiny Tina's Assault on Dragon's Keep Stuff like that. That's DLC to me.

Paying for weapon skins, new multiplayer maps, player skins, and other stuff like that? That's not DLC to me. I'm actually not sure what I call that stuff. Dressings maybe? Anyway, the point is that I don't buy that stuff, so I don't worry about it.
N

When it comes to Ubisoft, it should be referred to as DLM.

Depends on the DLC. I tend to love story DLC, like with what Obsidian did with Fallout New Vegas. They did the right amount of main story hinting for side stories. They planned ahead for the stories for those DLCs but it didn't feel like they cut out entire parts of the main game they couldn't finish to make a DLC.

I prefer outfit and weapons DLC's when they are free.

DLC's that cost a quarter of the price ($15) of the main game are suspect. $10 seems to be the sweet for good story DLC.

Companies that never drop the price of their DLC, even years after the game is released, and release a game of the year edition/ collection without all that DLC in it, can kiss my butt. *looks at EA/Bioware*

No Ubi... content that you clearly cut from from the game to nickel and dime isn't accepted.

Eh forget it. I'm just going to assume they're saying stupid things to stray away from the previous stupid thing they said about Ass Creed and fem characters awhile ago.

Oh, I mostly hate DLCs. Why? because it killed expansions.

Oh, you remember Expansions, don't you?

I have no problem for paying extra to expand my game play. I even love the idea.

But 3 dollar dlc for a few new guns that I might not even use as opposed to Expansions that have to alter my game playing style... there's no contest in what's better for the consumer.

Just as there's no contest in what's better for the designers. So we see why they love DLC.

And before you say it, yes, I get DLC is just another 'form' of Expansions. But back before they were downloadable, developers had to sit and think on how to change things and what to give to the consumer to actually make it worth purchasing the new DVD. Why should I pay 20 extra dollars? Oh. You're giving me all of that? Ok. Here's the cash.

Now, with DLC, you can make skin packs and palate swaps cost 5.99 each [http://store.steampowered.com/app/45760/]. And who cares because you don't have to purchase it because it doesn't really 'add or take away from the game', does it?

And that's the problem. Designers feel they can get away with making this nothing content that adds nothing or really takes nothing away from the game, and someone will buy it. It's like appealing to the lowest common demonator and saying "Why should we appeal to you discerning folks when we can still make money hand over fist by a few hours of coding to make Sakura look like a Japanese Female Drummer?"

And other than being outraged that it's devolved to this.. how can I fault them if it still works?

No, my Obviously Sentient and Clairvoyant Creepy little friend, it definitely is not that at all.

dragongit said:
Announcing a season pass before the game is released, knowing well it's content you could have waited to put onto the game itself, is always a grubby money grab.
Click to expand...

I dont understand this. I hear it a lot and it baffles me. Season passes usually get you like 4-6 DLC pack over a year or so. I can maybe see people arguing that the first pack could have been included in the game. But the rest? You wanted it to just shelf the game for a year until all those packs were ready? And dont say yes, because its pretty common for gamers to say 'Pushed back another year? Well whatever, window passed, I dont care about this title anymore.'

To me a Season Pass says 'We intend to release DLC for the next 12 months.'

But I guess Im just a sucker or something?

Said sarcastically, because I've purchased like 1 season pass ever. I tend to be done with games by the time the later DLC's come out, so they're not the best option for me. I mean I picked up the BL2 pass, but only got like 1 DLC in before the unskippable cutscenes + needing to repeat all the content wore me down.

I can accept DLC paloozas, thing is though the publisher has no choice but to accept me waiting for the GOTY version in the Steam sale for £2 more than the £5 standard retail version... So yeah okay publishers you win a whole £2, GG I guess.
Show hidden low quality content
You must log in or register to reply here.
Share:
Facebook Twitter Reddit Pinterest Tumblr WhatsApp Email Link
Top Bottom