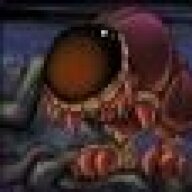 As one might guess by this thread being posted in the User Review section, it will contain some of my subjective musical opinion. Deal with it.

Tonight, I present to the fine Escapist community, my first user review. The subject: Judas Priest's Angel of Retribution

Angel of Retribution was released in 2005 following the return of singer Rob Halford. My review will - in accordance with the Seventh Law of Arbitrariness - be divided into three categories; Themes and Tone, Accessibility vs. 'Metalness,' and Overall Quality.

Themes and Tone
The primary focus of the album seems to be how awesome it is to have the old Priest line-up back together making music again. The opening track "Judas Rising" sets the tone with what would, under ordinary circumstances be a metal-horror track, but in the context of the facts regarding album's release and the band's freaking name is really more of a boast. Comparing Priest to Iron Maiden, "Ascending from Hell/ Forever despising/Judas is rising" has more in common with the sentiment of "Iron Maiden can?t be fought" then with the nightmare behind "Number of the Beast."
"Revolution" and "Demonizer" take the same tone further, and generalize the message beyond Priest's rebirth to the resurgence of heavy metal in the past decade following the shitstorm of 90s music. As the chorus of "Revolution" puts it, "Here comes a revolution/Time for retribution." Also, I always pictured the "scream of the demon" in the chorus of "Demonizer" as a reference to the unpleasant sound of mainstream pop.
I really can't be bothered to list every instance of self-referential fan-service present in Angel of Retribution, so I'll defer that honor to Wikepedia:
"Within the lyrics of the album, several references to past albums and songs are found, showing that Priest looks within their own history for development and inspiration. The song "Demonizer" references both "The Hellion" from Screaming for Vengeance as well as "Painkiller" from the eponymous album. "Hellrider" mentions both "Ram It Down" off the same-titled album, and "Tyrant" from Sad Wings of Destiny. "Eulogy" references "Stained Class" and "The Sentinel" from the albums "Stained Class" and "Defenders of the Faith", respectively.
The song "Deal With the Devil" can be viewed as a biography of Judas Priest, telling their origins from the Black Country of England's West Midlands, mentioning their transitory days gigging around England and practicing at the Church of Holy Joseph in Walsall, which is where Judas Priest was effectively born. "Deal With the Devil" also mentions the song "Blood Red Skies" from Ram it Down."

On the whole, if I were to sum up Angel of Retribution in one snarky sentence fragment, the phrase would be "Judas Priest fanfiction, as written by Judas Priest."

Really though, when it comes right down to it, none of this really gets in the way of Priest being what they've always been, rebels without a cause - the cause being left to their listeners to fill in. It's easy enough to redirect the songs' metal intensity toward whatever might be bothering you at the time of listening and so motivate yourself to smash those grievances into oblivion.

Angel of Retribution is certainly a solid choice for casual and committed metal fans alike. As is somewhat typical of the band, the sound of the album has notable differences from their other works, but if you're a fan of Priest's previous work you'll find plenty to entertain you. It was in fact my first Priest album, but for those new to the band I would recommend starting with something else. British Steel's catchiness makes it a good choice for those being weaned away from pop, while Screaming for Vengeance or Painkiller would be a better introductions for a metalhead looking to broaden their horizons within the genre.

Overall Quality
I'll get the worst out of the way first. The ballads ("Angel" and "Eulogy") are somewhat meh and the finale "Loch Ness" is comparable to Iron Maiden's epic "Rime of the Ancient Mariner" in length only.

Still, despite any negativity I've expressed up to this point, I fucking love this album. It's not quite as good as Painkiller or Screaming for Vengeance, but it's still of exceptional quality, in my view surpassing the overrated British Steel. I listened to "Worth Fighting For" around 40-50 times during the days of my desperate - though ultimately unsuccessful - attempt to salvage my last relationship and I would go so far as to declare it one of the best love songs in existence.
"Deal With the Devil," "Revolution," and "Wheels of Fire" are all solid entries, but I doubt they'll floor anyone. "Judas Rising," "Demonizer," and "Hellrider" on the other hand, will. They make truly great additions to the metal genre as a whole, and I'd be disappointed not to hear at least one of them if I were seeing Priest live, even considering their extensive history of great music.


tl;dr
Angel of Retribution is a glorious metal erection that thoroughly reams the vast majority of mainstream music, even if it doesn't leave it walking funny in quite the same way Painkiller does. Also, go back and read through the whole post asshole.
Show hidden low quality content
You must log in or register to reply here.
Share:
Facebook Twitter Reddit Pinterest Tumblr WhatsApp Email Link
Top Bottom