What We Learned At Konami Gamer's Night

What We Learned At Konami Gamer's Night 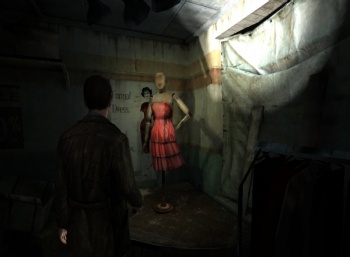 Konami had its 2009 wares on display at last week's Gamer's Night event, and we were there to learn about how Silent Hill: Shattered Memories cops ideas from GTA4 as well as plenty more on the controversial Six Days in Fallujah.

Last week Konami crammed a horde of notepad and tape recorder flaunting geeks inside one of San Francisco's hottest clubs and stuffed them full of high class hors d'oeurves and lots of booze for its annual Gamer's Night event. Was it worth all the money and effort? I'd say so, but I'm not the kind to complain about free food (or booze).

The night started with a press conference that gave us a peek at some of the bigger titles Konami's got in store in 09. First we got a detailed look at the Saw game, which you can find my detailed impressions of over here [http://www.escapistmagazine.com/news/view/90897-Saw-Hands-On]. Next up was a trailer for Karaoke Revolution which didn't draw much enthusiasm, and then Silent Hill: Shattered Memories producer Tomm Hulett took the stage to show off the motion-control-filled makeover of the first Silent Hill.

"Reimagining" is Konami's key word when it comes to Shattered Memories, and Hulett was emphatic that it's not just a fancy name for "remake." Obviously the visuals have gotten a facelift, the story's been revised and tweaked and there are new puzzles with "physical interactions." But there's also the enigmatic "nightmare world," the new multifunctional cell phone that acts as your menu/interface/camera, the Wiimote controls which make flashlight pointing-while-moving simple and eliminate the need to run up and press a button to interact with objects. Not to mention a new soundtrack scored by fan favorite composer Akira Yamaoka. Yes, you're hearing the sound of Silent Hill fanatics squealing in joy.

Moving on to what Hulett awkwardly referred to as a new take on "terror," we then got our first substantial look at the controversial Iraq war shooter, Six Days in Fallujah.

As Atomic Games president Peter Tamte pointed out, Six Days in Fallujah is "not about the politics of whether [the US] should have been there or not" but simply telling the stories of the soldiers who have been there and back. "Games are the most powerful communication tool ever created," Tamte said.

As it turns out, it wasn't Konami or Atomic's idea to make the game. According to Tamte, the marines themselves (who have worked with Konami on training simulations) approached the developers and asked them to make a game about their experiences. 47 marines worked on the title, and, said Tamte, Iraqi insurgents and citizens had some involvement too, though to what extent he didn't specifically go into.

Six Days might have lofty intents and some genuine credentials, but based on first impressions, it's clear it's still just a videogame. In the demo Konami showed, a group of marines are wandering through the city streets when they run into some enemies. Taking Gears of War-style cover behind some burning cars and crates, a firefight ensues in which the player soldier gets hit by a few bullets, loses some health, then ducks behind a pillar. He then pulls up a menu and switches to an explosive, blows down a wall (everything is destructible in the game, especially cover) and flanks the enemies.

Aside from the wholly destructible environments made possible by Atomic's proprietary engine, Six Days doesn't seem to have much to write home about aside from its subject matter. It could be a straight up documentary game, but if you can get shot ten times and then pull out your grenade launcher, I don't know. Atomic and the marines involved seem to have big ambitions, and it's nice to see somebody treating games as a viable way to talk about recent history, but I'm not sure Six Days knows where it's going.

Not that any of these games were especially bad - I had a good time melting ants with flamethrowers in Ant Nation - but there was the sense that, for all the glitz and glamour, there wasn't much to show. Then again I had high hopes: I was expecting Koji Igarashi of Castlevania fame to fly down to the stage with a whip and announce a 3D Castlevania. Sigh. That's what E3 is for, I guess.

I feel kind of like I'm stalking you because you keep on posting things and I comment on them in about two seconds.

I'm disappointed to hear about the state of 6 Days, but it seems like people can't get over flashiness.

Also, don't be too worried about Igarashi not swinging down from a whip, E3 is supposed to be back to its former glory this year.