"It is the game you meant to play but didn't until it became hard to find and fell off the shelves, another single wailing the bargain bin blues: Grim Fandango. The crime noir, jazzy, art deco graphic adventure came from a hazy era when LucasArts' catalogue was more substantial than a long list of Star Wars titles, and the ever familiar shooters of today were only beginning to get really popular. The adventure game genre was in its death throes, and Grim Fandango was its last horseman."

Like with XCom, I'd pay to have a "re-mastered" version of Grim Fandango, with the latest graphics and sound. Gameplay never ages, but unfortunately, other things do.
B

mmm i really would like a remake of grim fandamg with updated graphics, i played the game long ago but i never suspected tha had such a fanbase, is a pity that in these days lucas arts just makes star wars games
S

Actualy, i would hate to se it re-mastered, i think it is probably the best looking game ever made and probably will be for years.

On the other hand i would love to se a movie based on it.
N

I loved this game! Unfortunatly Lucasarts started to focus on starwars and other fps's instead of good ol' witty/dam right funny adventure gaming. Monkey Island isn't due for another GODDAMN 7YEARS!!!!

I have the game in its spanish version, and is completely awesome, the voices are lovable, not like other games translated in spanish (I usually hate the translations). I specially liked the bad guy's accent, it was argentinean *grin*

I wouldn't like it to see it remastered. The whole atmosphere of the game is already wonderful as it is. 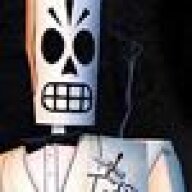 I was asked a few years ago what my favourite game was. A question most long-time gamers will struggle heavily to answer. Having played hundreds of games over the years, it took me a long time to actually decide upon my answer. Grim Fandango. I'll always encourage people to give it a try. The game has such style, such wit. It simply hasn't been matched, and given the shocking state of games today.. I'll be amazed if it ever is.

I still have my copy within arms reach.
G

Still on the rack of games on my shelf instead of piled in a drawer. It was an article about the music in an issue of Electronic Musician that drew me to it.
C

Wasn't the greatest but I thought it was Fun, Gripping, Hilarious , atmosperic etc and that sorta made up for it.
B

i would like o say that this was one of my favorite games, the world, the artwork, the story, it was something original, unique, a piece of art, maybe one of those that have problems for secuels, pitfuly my cds dont work anymore. also the spanish dubbing, amazing, specially compared to other games, every game should be dubbed like this one.

the idea of a grim fandamgo movie, it sounds interesting, but i would like a 4 movie saga, and have the supervision of the original writers.
M

How can you expect video games to improve in the way of depth and things like that when people go out of your way to ignore awesome games like that to buy games that have been done to death after their 2nd sequel?
D

This is hands down my favourite game ever. When anyone asks for a favourite I say "Grim Fandango" without a pause. No other game has made me feel such a wide range of emotions.
U

wow, big thanks for even acknowledging this game. what a phenomenal experience it was... the soundtrack alone was worth the price of admission
S

Since I played it for the first time, to this day I still think it is the best game I ever played.

As for a sequel, please no, I want to know more about that world and storys that could be told, but any kind of sequel would only end up beeing compared to the original and Grim Fandango would be it's own worst enemy.

I'm hoping that Brutal Legend does better in sales than this game and Psychonaughts did.
R

It had, at least in my case. I tried the demo and being a little skilled player at the time I just got lost in controls and camera angles so I gave up.
S

It had, at least in my case. I tried the demo and being a little skilled player at the time I just got lost in controls and camera angles so I gave up.
Click to expand...

I am one of those lame monkeys who use walkthrought in adventure games. All the puzzle solving was just a minor anoyance between me and my interactive movie. 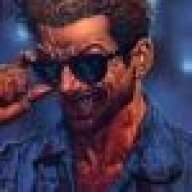 I actually joined this forum just to post in this thread. Grim Fandango is, in my opinion, the best game ever made. Few games have ever affected me as much as this one. I listen to parts of the soundtrack almost every day, because aside from the fact that it is absolutely amazing, it also reminds me of the great time I had playing this game.

Atmosphere is one of the most important things in a game. When a game has it in such levels that you actually believe a crazy story about mexican-themed afterlife, you know you've got a great game. The quality of writing in this is much better than most Hollywood movies, the art style is absolutely amazing, the voice acting, the pacing, the puzzles, everything is just about perfect. Of course, the gameplay was a little awkward at times, but I was so awestruck at pretty much everything else that I never even noticed any major problems.

It's refreshing to see that I'm not alone in my admiration. Grim Fandango is, simply put, one of the few games that I really would classify as art. The only other game that I know that is comparable to it in sheer quality, ambition and beauty is Planescape: Torment. There should be a feature about it as well.
J

Like Alexandra, I played a foreign version, Brazilian, what give a special flavor to the voices: in Brazil we speak Portuguese (duh!) and the characters have a very funny Spanish accent and the voices are great, very well interpreted.

In my not so humble opinion, the problem is, the game was targeted for people who likes this kind of sophisticated humour, and most of them don't like games. I showed Grim Fandango to some friends who laughed with the dialogues, loved the scenario, while I was playing, but they didn't have the skills or patience to play by themselves. We are indeed very lucky for knowing this masterpiece, which I also think is the best game I've ever played, but... It was too hard to play for the public it was targeted. It would probably make a very good movie, as sammyfreak suggests.
Show hidden low quality content
You must log in or register to reply here.
Share:
Facebook Twitter Reddit Pinterest Tumblr WhatsApp Email Link
Top Bottom