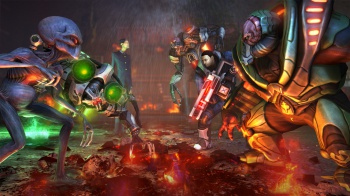 The next game in the long-running X-COM series, XCOM: Enemy Unknown, won't be strictly a solo experience. Publisher 2K Games has announced that Enemy Unknown will be getting a multiplayer mode. The one-on-one deathmatch will be a first for the series, allowing gamers to "finally find out what it's like to command alien units and unleash extraterrestrial destruction on Planet Earth or defend it with a squad of XCOM soldiers and alien allies."

The multiplayer mode will be a standalone experience separate from the game's campaign, utilizing "the gameplay, tactics, and strategy of the single-player experience without making any direct ties to the narrative." The turn-based gameplay will allow players to control either soldiers or aliens--or both, if you want to get really crazy.

The strategic element makes this sound pretty different from the deathmatch modes seen in many other games, which could be a big draw for fans of the series. XCOM: Enemy Unknown will be out on October 9, 2012 for the PC, PS3, and Xbox 360.

Could be kinda fun to mess around in, as long as it doesn't pull and resources from other aspects of the game.

From what I've read on 2 other sites this morning running previews of this new X-COM MP heres what I've learned:

- Ranked matches have a resource limit that determines what you can purchase for the match(think tabletop) but how you spend it is up to you. High quality, fully kited out super soldiers in low numbers or a larger force mainly consisting of cheap units and anything inbetween. Resources are able to be spent on units/gear/weapons and powers.
- Aliens units have unique abilities such as the Chryssalid that can attack enemies infecting them to slowly turn into more Chryssalids. The infection wasn't limited to enemy soldiers in the SP as they could also infect local civilians making them potential threats if not eliminated however no word if there are civilians in the MP portion.
- 90 second turn timer in MP
- Private matches can be customized with different rules
- 6 unit cap in MP don't know if can command more through things like Chryssalids.
- Firaxis has said they developed their PC and Console UIs concurrently to play to those platforms strengths saying

As it is right now my only question for October 9th is will I play this or Dishonored first?

toomuchnothing said:
As it is right now my only question for October 9th is will I play this or Dishonored first?
Click to expand...

I'm waiting to see the user reviews following . I figure if the forums aren't awash in rage over either title I'll grab them.

Heck even if the forums are awash in rage, if they end up on sale I'll grab them. I usually find I don't agree with most of the ranty banter here.

I usually let out a sigh of disappointment whenever i see multiplayer modes added to games that have traditionally always been singleplayer, but i suppose this doesn't have to be that bad.

Sounds pretty interesting actually, although I'm not a fan of multiplayer in strategy games, this could be a nice little diversion.

There was a mod / player made expansion for the original xcom that allowed multiplayer, ufo 2000, I think. It was pretty good.

Johnson McGee said:
There was a mod / player made expansion for the original xcom that allowed multiplayer, ufo 2000, I think. It was pretty good.
Click to expand...

You could also command the units via older utilities and hacks solo.
In fact, I recall being able to customize entire encounters with UFO 2000, though it has been bloody ages.

I read an entire Lets Play devoted towards playing XCOM 2 *as the aliens*, and having other players challenge them to determine the outcome of the "story".

This actually sounds quite fun. The chance to play as aliens would definitely be worth the frustration I would feel from being destroyed by people better at the game.

DVS BSTrD said:
I it would suck if the perma-death overlaped!

toomuchnothing said:
As it is right now my only question for October 9th is will I play this or Dishonored first?
Click to expand...

Edit: Also curious why Escapist told me about you quoting this other person .

Your old school-ness has been acknowledged.

octafish said:
that there is no mention of play by mail...
Click to expand...

Probably got to do with the cost of stamps these days...


... or are you one of those PBeM dilettantes?

Worgen said:
Could be kinda fun to mess around in, as long as it doesn't pull and resources from other aspects of the game.
Click to expand...

Unfortunately the chances of no resources being pulled from the rest of the game is about nil, unless they hire a completely new team to handle the multiplayer.
C

It sounds pretty epic. That said I will try to beat the regular game first to avoid spoilers, but I'm happy to see that they defaulted to having time limits per turn as it helps make multiplayer a lot smoother for turn based games. It also fits in with their design strategy to cap squads at about 1/4th the size of the original in order to speed up game play. That said overwatch FTW!

octafish said:
that there is no mention of play by mail...
Click to expand...

Probably got to do with the cost of stamps these days...


... or are you one of those PBeM dilettantes?
Click to expand...

In ALL things but photography and family I am a dilettante, although I prefer "dabbler"...

Back in the early eighties when I was in grade three I used to play chess through the mail with a pen-pal in the UK. We had five games going at the same time, and I used to wait eagerly for those letters. He won three of the five games.

Why the bloody hell must devs insist on shoving multi into things? Xcom single player has a lot to live up to as it is, without ressources being diverted from it.

Eugh im genuinely pissed, the more news I hear about this game the more the warning signs are starting to pile up:

-Extremely limited squad size (which is a big deal when you go from 24 peeps to friggin 4)
-Small tight maps from what we've seen, possibly related to small squad sizes
-Fancy cinematic effects when people do stuff, another factor in limiting squad sizes i'd imagine as having had long animations for 24 xcom troops+twice that in aliens would be too much for the poor modern gamer who needs an awesome button where things go whoosh and stuff.
-And now the obligatory tacked on multiplayer mode.