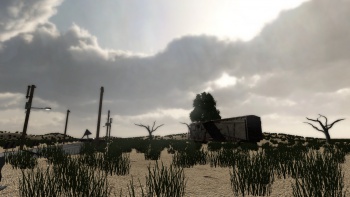 Called "broken" and a "scam," Earth: Year 2066 is no longer available on Steam as an Early Access game.

"On Steam, developers make their own decisions about promotion, features, pricing, and publication," Douglass wrote. "However, Steam does require honesty from developers in the marketing of their games. We have removed Earth: Year 2066 from Early Access on Steam. Customers who purchased the game will be able to get a refund on the store page until Monday, May 19th."

Earth: Year 2066 first went on sale for $19.99 through Steam Early Access on April 17. Customers complained on and off of Steam about the game, and The Escapist's Jim Sterling [http://www.escapistmagazine.com/videos/view/jimquisition/9075-Salt-Of-The-Earth-A-Steam-Fail-Story] said the game's developer, who called himself Muxwell on Steam, deleted comments in the game's Steam forums to portray the game in a more positive light. Sterling also noted that the artwork for Earth: Year 2066 was stolen from an artist who had never given Muxwell permission to use it.

Early Access allows players to buy unfinished games from developers, report bugs, and provide input. These games are still in development, but they are in a playable state. An overwhelming number of people who tried playing Earth: Year 2066 reported it was broken, barebones, and unplayable in its current state.

Criticism of Valve's Early Access program has increased with the number of games going on sale with no guarantee of being finished. With Early Access and crowdfunding sites like Kickstarter becoming more of the norm, consumers will need to be more aware of where their money is going.

Well, this is a step in the right direction. Hopefully this is a sign that Steam is starting to clean up their act.

It seems that early access might be the only place where Steam has anything approaching quality control, then.

A victory for Jim Sterling! TNX steam, now what about all the other spamware?
V

erttheking said:
Well, this is a step in the right direction. Hopefully this is a sign that Steam is starting to clean up their act.
Click to expand...

Valve has pretty much done this every time a game was on Steam that was found out to be a scam/dishonest/whatever.

They don't seem to care about all the low quality stuff on Steam. It's more the fact that this game specifically has been terrible publicity and legal minefield. Stolen content and breach of advertising are stuff that can affect the distributor legally. Shoddy products are not an issue for them legally. And the old argument goes that someone out there could like it. The WarZ had it's defenders too. So unless they breach some law. Steam won't care. And I would argue they don't NEED to. But they should.

I saw it up again as something different yesterday. Lemme dig it up. It's also on Greenlight.

The identical but named different one from the same arsehat has vanished though. Would encourage everyone to go downvote this crap.

I do not think it should be Steam's responsibility to quality control products uploaded to Steam. Valve gives developers an easy place to showcase games (regardless of how good or bad they are) and allows those devs to continue to develop the way they want too. What Valves responsibility is however is just this case. A game that was obviously just a junk cash grab from somebody with no intention to ever develop his craft and become a better developer. IMO, Steams Greenlight and Early Access is working as intended and it really should be more our responsibility to not go willy nilly into a new game that's being featured. All just my opinion.

I'd applaud Steam for this move but I'm gonna hold off since this is just one out of multiple problems fixed. If they want to regain the lost faith of their community, they need to start cracking down on scammers and filtering their content like YESTERDAY! The consumer should not have to be quality control for Steam. They can't afford anymore bad PR.

Oh and I wanted the 100 dollar Jim sterling edition. A think to note this game wasn't pulled because it was crap, at least that's what I hope. As far as steam goes there isn't anything wrong with releasing a undone game and updates. It's better that this game got pulled for Muxwell trolling the forums, altering forum posts, and BS reviews IMO.

There is always going to be crap and some times crap is just a matter of opinion. It's more important devs know they can't act however the hell they want and be complete jerkoffs to people even if they didn't buy the game. While they weren't muxwell's customers they still were steam's customers.

Anytime I ever doubt Greenlight or crowdsourcing in general. I open the prison architect store page.

Early access is a con, just release a damn demo of the game. Because even though its early access, you would still expect a certain level of quality. Not something that looks like it was thrown together in a weekend. Thing is while Steam is more of a shop and likewise cant check its quality. But their should also have short timed demos of these titles as a taster before a person spends money on something that a scam. An with enough complaints, Steam should look into that game and then take it off their site. Instead they left it their just to make money off it.

erttheking said:
Well, this is a step in the right direction. Hopefully this is a sign that Steam is starting to clean up their act.
Click to expand...

Valve has pretty much done this every time a game was on Steam that was found out to be a scam/dishonest/whatever.
Click to expand...

Yeah. And they even let them rebrand the stuff at times: The most prominent such fuck-up was probably War Z and that has since been rebranded as Survivor Stories. I don't think Steam will change anything in the near future. Especially not considering the reaction here was the same as in earlier cases and nothing happened regarding the underlying issues back then, either.

XenoScifi said:
I do not think it should be Steam's responsibility to quality control products uploaded to Steam.
Click to expand...

Exactly. It's like when I go into a Wal-Mart supercenter, I have no idea if the fresh produce they sell is "all-natural" or not, regardless of whatever labels the producer puts on it. Wal-Mart has absolutely no responsibility in the quality of the products they sell. And if customers don't like it, they can get a refund from the farmer and then go shop at Origin K-Mart.
Click to expand...

If i bought that game at walmart, and got it home and it was crap. I can take it back and get a refund. Same with eveything else they sell. Cant do that with Steam, havnt used it in a while so i dont know if they do refunds. But thats why they need better quality control as its a consumers rights to get refunded - atleast it is in the UK. That 2066 game would have had so many returns that it would have been removed from the shop shelves.

Lono Shrugged said:
Anytime I ever doubt Greenlight or crowdsourcing in general. I open the prison architect store page.
Click to expand...

Indeed, alas it is but one of a few shining examples in a sea of sour milk and urine.