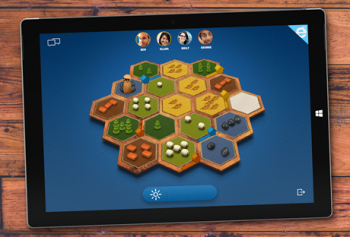 Microsoft is creating a virtual version of the popular tabletop game of barter trading, The Settlers of Catan.

Catan Anytime is the result of a partnership between Internet Explorer and publishers of Catan, Mayfair Games and Bontom Games. The complete Catan ruleset: Development cards, Achievements, and Ports will be released at GamesCon in August.

In the current beta - or preview, as they call it - you can play one turn before you have to register to keep playing. Features included in the digital version include auto-trade and auto-roll functionality, as well as email notifications for when you are away from the game.

The Settlers of Catan has sold 20 million copies and is now available in over 30 languages.

You can try out Catan Anytime right here [http://www.catananytime.com/?utm_source=Blog&utm_medium=PR&utm_content=Exploring%20IE%20Blog&utm_campaign=Catan%20Launch].

How do you feel about bringing asynchronous gameplay to The Settlers of Catan? I'm generally a fan of asynchronous play, but when a game has a strong social component, some of that human contact is lost, as is the magic of the game.

After going to the actual game it would have looked better with flat textures and gradients like what the small picture here looks like it would have.

Seeing it fullsize with weird texture doesnt look that good.

IF they would port this to the WiiU I think it could become THE game for the system.
-As long as everyone had a WiiUmote.

What? The fun of Settlers lies in desperately bartering with whoever has become the local wheat baron whilst hoping no one notices all those progress cards you've been sitting on. Asynchronous play doesn't really suit that.
V

Sigh... I was actually interested there for a second. Then IE came and ruined everything.

I'm not even going to try it. If I do, the terrorists win.

Shamanic Rhythm said:
What? The fun of Settlers lies in desperately bartering with whoever has become the local wheat baron whilst hoping no one notices all those progress cards you've been sitting on. Asynchronous play doesn't really suit that.
Click to expand...

I agree; Settlers is not such a fun game that you play it in of itself. It's only suited to a boardgame because of the social dynamics of it. As a game, it's rather meh.
R

Catan Anytime is the result of a partnership between Internet Explorer and creators of Catan, Mayfair Games and Bontom Games.
Click to expand...

Sorry, no. The creator of Settlers of Catan is Klaus Teuber. Maybe those companies published it in the US but they did not create it.
R

Are any of them actually good?
Care to send a link if one is?
R