Fieldy409 said:
Why don't you name or post this youtuber so we can see what you're talking about?
Click to expand...

Unless you're part of the Warmachine & Hordes/Iron Kingdoms RPG community and a member of multiple faction/main discussion groups, I don't think there's much point (they're all private) as the videos themselves are fine. He gives an intro which lasts maybe a minute or so(?) which is a precis for the most part, then provides the content (for another 10-12 minutes). It's the social media posts that go with sharing the video that I find is the issue (the "share" post is usually a bit more... vehement, I guess, than the parent post). The parent post never promotes the content, only comments on it, if largely to criticise, however much the criticisms may be considered valid. I don't know about anyone else that follows the guy, but it can be pretty relentless given it's shared to multiple groups and it's lucky he only uploads once every couple of weeks at the moment.

I could do with a little of it, but if it's too much then it'd come off as compliment-baiting to me and I'd quickly tune out.

Even if the creator's intentions were different. 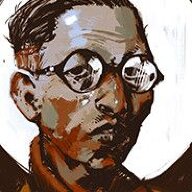 ObsidianJones said:
I would stop watching a Youtuber if what they are putting out now is not healthy to my gestalt.

An example was Razorfist. I actually liked his reviews a while back. I didn't mind the "in your face" style. Sure, he was abrasive and not a fan of Movie Bob or Game Trailers. But I didn't consider him outright hateful (not racially) until 2016.

And it seemed like not only did he drink the Trump Cult/Qanon kool aid, he brewed it in back and invited people to see his special recipe.

During the time where video game and movie content seemed to wane and more political hit pieces came out, I had to distance myself just a few months after Trump was elected because I was already dealing with the disappointment of having Trump as the President.

I can only imagine how much it worst it got this last election.
Click to expand...