It's like House of the Dead except they explode! 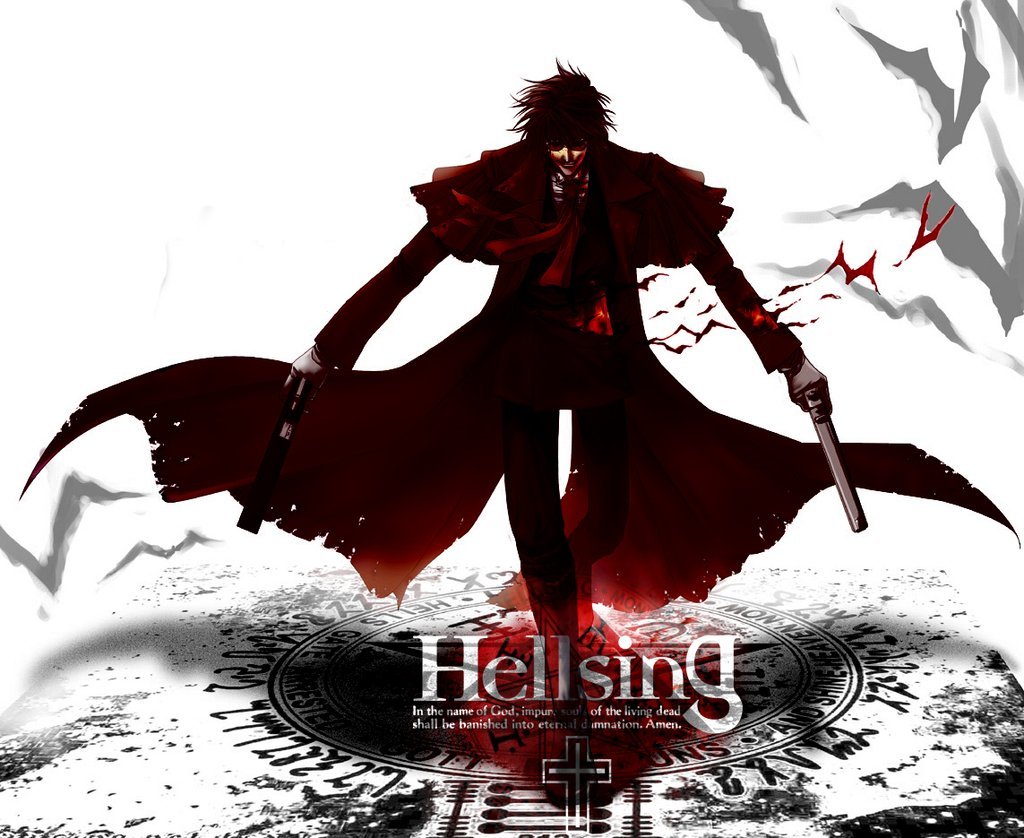 The anime starts off interestingly enough. It showcases what we can expect from this anime and it doesn't disappoint. Lots of zombies, a bad-ass vampire hunter, a tough commander and blood. Lots and lots of blood.

Story goes like this: Vampires exist and it's the job of an organization, by the name, Hellsing Organization to kill them. It specializes in this field and is headed by a tough-to-please commander Integra Helsing. To the public, the Hellsing Organization is non-existent and the Organization makes sure that vampire remain the same way. However, in a recent months the number of vampire attacks has increased and this worries not only the Organization but also, the Iscariot, the unofficial monster eradicating agency of the Vatican and sworn enemy of the Hellsing family, despite their similar goals.

If the vampire attacks are too large to be contained, the Hellsing Organisation deploy their 'weapon' and the Vatican, do the same. On the Hellsing's side it's Alucard[footnote]A play on words, if read backwards, it reads Dracula. HOW CLEVER.[/footnote], a vampire hunter,a true vampire and indeed, one of the first to roam the Earth. This vampire has acquired great power during the centuries and this is shown in beautiful animation as you progress through the series. Not only is he supernaturally stronger than any one save for a few special ones, he is also a master in weaponry. He wields two guns, big ones. Reminds me of Dante from Devil May Cry. I'll be frank. It's very satisfying watching the new re-born vampires shake in terror as Alucard aims his gun(s) at their heads while he taunts them for smearing the name of vampire. By the end of his many battles depicted in the series, you learn a very important lesson, don't mess with Alucard. You'll get shot in the face if you do.

And then there is Walter. Walter C. Dornez. The butler of the Hellsing Organization. Not only is he a butler but he also a good friend of Alucard and an important ally. His weapon? Wielding high-velocity monomolecular wires with incredible skill and precision. I kid you not. His title of the "Angel of Death" is well-earned. And even at the age of 69, he can slice and dice the hordes of the undead.

On the Vatican's side, it's Father Anderson. A devout Catholic and a bad-ass bayonet weilding priest. He kills vampires with ease and is ,in a word, insane. He is against vampires and nurtures a deep hatred for the Helsing family. Especially, Alucard since he just refuses to die and is thus, viewed by Anderson as his greatest enemy.

The cast is overall quite interesting to watch. In the very first episode, we are introduced to the Commander of the Hellsing Organization: Integra Helsing. She is very dedicated to her family's duty and will never take no for an answer. She is also the master of Alucard. Here we get acquainted with Alucard and his methods for dealing with vampires and it seems on the whole, weird that an all-powerful vampire such Alucard would serve under a human but it's obvious that he enjoys his job as a vampire exterminator. And then, we are introduced to Seras Victoria, a former police woman and now a vampire-in-training. She is the apprentice of Alucard. The entire series is more or less, focused on her difficulties adjusting to the life of a vampire and being under Alucard's wing. The anime does a good job and so it doesn't seem like a chore watching her learn how to do the hunting. And, she's kinda cute.

The anime is on the whole very satisfying to watch and it's definitely worth it watching Seras and Alucard kick some serious vampire ass.

And now the question remains, as bad assed butlers go, who woud you have... Walter or Sebastian? >:3

A good well written review and I whole heartedly agree with everything. And on that note have you seen Hellsing Ultimate yet?

Best of the 3 said:
And now the question remains, as bad assed butlers go, who woud you have... Walter or Sebastian? >:3

A good well written review and I whole heartedly agree with everything. And on that note have you seen Hellsing Ultimate yet?
Click to expand...

Sebastian. No contest. Walter's cool but Sebastian.... he caused the Great Plague. How much more bad ass can you get?

And yes, I am watching Ultimate right now. Ep.7 is nearly done.

sigh fine... you're the fourth mate to recommend me this anime, so I might as well give it a shot or three. How many episodes are avaible at this moment?

Farmer_Casper said:
sigh fine... you're the fourth mate to recommend me this anime, so I might as well give it a shot or three. How many episodes are avaible at this moment?
Click to expand...

Farmer_Casper said:
sigh fine... you're the fourth mate to recommend me this anime, so I might as well give it a shot or three. How many episodes are avaible at this moment?
Click to expand...

I hate it when people recommend anime to me, I really don't give damn about Japan or uninteractive media to begin with and most of these people are hardcore anime fans with no background that convinces me of their capability as a critic. Your words are the ones that can convince me, so I am going to check the first episode right now (no delay!).

Indeed. Good Luck. Hope you find it as fun as I did.

Hellsing is one of my favourite anime, though the series is nothing compared to the awesomeness of the ultimate OVAs, which have one of the best done animation I have seen (and lots of gore). I happened to stumble upon Hellsing after hearing about Twilight, so yeah, it was quite nice refreshing.

Very positive and compact review, though I could have liked some more analyzing of the series as a whole or...something, I'm not really good at rating other peoples work. I always try to recommend the OVAs over the series, but you do need some patience to go through about 45 minutes of it in one sitting.

...Now where is OVA 8. They are testing my patience! Settle on one studio and finish the damn think already!

By any chance have you seen Hellsing Abridged? It's my only exposure to this show, and it's hilarious.

I'm watching Ultimate right now and it's damn good. They said that Ep.8 will be here by end 2010. Well...where the hell is it!? I want the catboy to die! It's very annoying when vampires appear to be strong in front of Alucard and yet, when Alucard actually bothers with them, they proceed to cry. And, criticisms are always welcome. Don't worry. It might be updated in a few days.

Indeed. Watching it right now. It's moodier and also funnier at the same time.

Damnit, another to the list of things I need to watch. >.<

I'm sure this'd be much easier if I actually watched them. I don't know why, but I never have time...

Too much to do? I watched them bit by bit. Halfway I even forgot which episode I was watching!

Too much to do? I watched them bit by bit. Halfway I even forgot which episode I was watching!
Click to expand...

Bugger it, I'm going to watch them now!

I joke you not.

Mmkay. What'd you shotgun me for?!

Mmkay. What'd you shotgun me for?!
Click to expand...

But, to be serious, this anime is very good and has it's fair share of laughs and horrors.

If by "kinda cute" mean "got a huge rack" then yes, I agree, wholeheartedly.
As for the review it was lovely but too much story explainy of the characterys, because if I watch it I want to get that from actually watching it. Otherwise a good length, interesting and with only a few spelling mistakes (well maybe not spelling but just bad writing segments, I dunno). But yes, enjoyable.