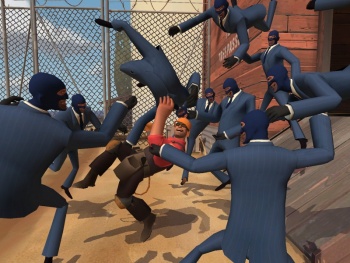 Given the amount of possibilities, it seems Valve is willing to share some of the scrapped ideas that won't be making it into the final product, shedding some interesting light on how the Team Fortress 2 design team approaches things.

The first scrapped idea unveiled is the Repair Node, a building that the Engineer would be able to construct replacing any of his other structures (Sentry Gun, Dispenser, and Teleporter). The Repair Node would automatically repair any of the buildings around it as long as it had energy, but would have to spend time recharging once it was drained. The purpose of the Repair Node was to make Engineers feel like they didn't have to spend so much time babysitting their nests, and could go out to blast enemies with their shotgun or to collect additional scrap metal.

Unfortunately, the Repair Node presented complications: Not only did it make it easier for Engineers to create and defend choke points, but it also made Valve realize how crucial Dispensers and Teleporters were to the game. The Sentry Gun may be the most iconic image of the TF2 Engineer, but a lack of Dispensers and Teleporters was arguably more important from a gameplay perspective.

Without Dispensers, says Valve, "[t]eams were more fragile, metal was harder to get to the front lines, and team rally points were harder to define." Furthermore, the pacing of some maps "became completely broken" without Teleporters in the mix. "Teams weren't able to push as effectively and the lines of battle moved closer to the spawn points. This lack of flexibility meant that attackers weren't able to hold gains and matches took longer to complete."

And there were important social changes, too - teams saw an Engineer who wasn't building a Dispenser or Teleporter along the same lines as they would see a Medic who refused to heal: What's the point, and why are you on our team?

It just goes to show you that in a game like TF2, even a relatively small change can have huge repercussions on gameplay. And that's just one item - hopefully, Valve will be pulling the cloth off of some more failed Engineer Update goodies soon enough.

Also an excellent reason is that...

Abedeus said:
Also an excellent reason is that...

same for the medic update, and the heavy update. kinda hard to avoid that, no matter how they do it. that's why it's good to keep servers favorited that have class limits.

They'll likely replace the sentry gun with a oil pump, meaning the Texan Engie can merely sell out the other team.

Still, cant be as bad as that sodding bow and arrow.

Bearer of the Necronomicon

I cant really think of anything they can add to the engineer to make it better. Maybe a joke weapon or two like the jarate? 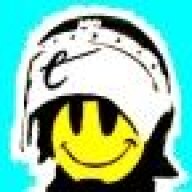 It looks like Valve really puts a ton of thought into their class updates which I find extremely comforting. I just hope it doesn't take FOREVER to release the Engie update. I want my Anti-Spy Sapper tool damnit!!!

And besides the Engineer is comparitively easier to play than any other class. It only really tests your basic motor skills.

Only if you have a Spy who is stupid enough to risk attacking 7 wrenched engineers at once. Because otherwise, a Demoman with the Scottish Resistance would be better. 2 nades per sentry... mrrr.

Well I guess I'll finally get the Ubercharge a demo/get ubercharged as a demo and destroy 5 buildings achievements at long last.

All this time after the Medic update and I still don't have it!

I'd like to see some other failed upgrades, for any of the classes.

Article said:
In other news, our minds were blown this week when we saw Andrew Kepple's amazing Spy & Pyro cartoon. We've decided this is final proof that TF2 fans are smarter, more creative, and much better looking than fans of all other video games.
Click to expand...

Screw the updates, I'd rather see them finish the Medic and Pyro videos, then get on with Half Life 2 Episode 3 or Half-Life 3, whatever the heck they're not doing.

Me55enger said:
They'll likely replace the sentry gun with a oil pump, meaning the Texan Engie can merely sell out the other team.

Still, cant be as bad as that sodding bow and arrow.
Click to expand...

Not until Sony desides to change the system architecture of their console to something that's easier to develop for.

Hm, I wonder what they could possibly do that would make a difference. We'll probably see a weapon change as that's pretty much a given. One thing that I think would be cool is the ability to construct bunkers. It switches vulnerability to sapping to needing actual teammates to make it effective.
J

A shotgun that uses up metal when it fires would be good, the metal of course giving it improved damage at the cost of 15-a-shot.

@John Funk: How you are still posting news when you could have been playing a match of SC2 is beyond me. Your impulse control must be legendary... 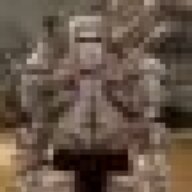 And besides the Engineer is comparitively easier to play than any other class. It only really tests your basic motor skills.
Click to expand...

I disagree enge like spy is one of the classes that it becomes much harder to play when people get better, the sentry is powerful sure, but it's dumber then your mum on acid, and twice a slow, I can usually circle jerk a level three if it's left alone and not up against a wall when I'm a pyro on my own.
Show hidden low quality content
You must log in or register to reply here.
Share:
Facebook Twitter Reddit Pinterest Tumblr WhatsApp Email Link
Top Bottom