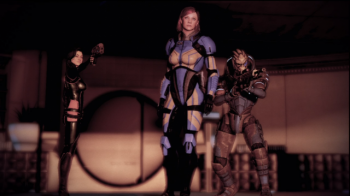 The female Shepard might not everyone's choice, but that hasn't stopped plenty of people falling in love with her.

It may have taken three games to do it, but BioWare is finally featuring the female Shepard in Mass Effect marketing. The default Commander Shepard is male, but BioWare has acknowledged that the female version - often referred to as "FemShep" - has plenty of fans too, and will feature her in a new trailer.

BioWare laid the groundwork for this decision back in May, when marketing director David Silverman told his Twitter followers to speak up if they wanted the trailer. The very next day, Silverman said that he had woken up to hundreds of messages saying yes. Silverman confirmed that FemShep would appear on the collector's edition box art on June 11th, and confirmed [http://twitter.com/#!/dsilvermanea/status/80632526871330816] on June 14th that a trailer was in the works.

Interestingly, it seems that BioWare hasn't decided what the default appearance for the female Shepard will be. It's hard to believe that it will be all that different from the default female model from the first two games, but BioWare may surprise us yet.

Figures released [http://www.escapistmagazine.com/news/view/105655-BioWare-Gamers-Prefer-a-Manly-Shepard] by BioWare suggest that only around one fifth of Mass Effect players use FemShep, but clearly they're a persuasive lot. BioWare does seem to be trying to be more inclusive with Mass Effect 3 though, as evidenced by the inclusion of homosexual romance options [http://www.escapistmagazine.com/news/view/110063-Its-Old-Flames-Only-in-Mass-Effect-3-Says-BioWare-UPDATED] - something the studio has shied away from before with the Mass Effect games - and this could be another part of that effort. Of course it could also be a marketing ploy. Heck, it could be both.

the advertising for mass effect always bugged me, they loved to stick the most boring looking version of shepard in the ads and it was annoying how they only used the maleshep since femshep had a much better voice actor, in my option

Logan Westbrook said:
It may have taken three games to do it, but BioWare is finally featuring the female Shepard in Mass Effect marketing. Canonically, Commander Shepard is male, but BioWare has acknowledged that the female version - often referred to as "FemShep" - has plenty of fans too, and will feature her in a new trailer.
Click to expand...

False. BioWare representatives have stated multiple time that there is no canonical Shepard, and that includes the character's sex.

With the "Mass Effect: Redemption" comic they even made a reference to this by saying that Shepard's corpse was in such bad condition that they couldn't even see if it was male or female.

Second: I'm sorry, what? I believe they are mistaken. The male Shepard is the non-cannonical Shepard. Everyone knows the female Shepard is the real one; I'm mean, she has a better VA, delivers her lines better, has better romances and kicks ass a hell of a lot more stylishly than male Shepard.

I thought this happened ages ago?
E

One fifth? Thats odd. I figured it would be more. FemShep is the only version I use.

Bets on her cup size being at least an E, and generally fulfilling the 36-24-36 image?

There's a male Shepard too? Huh, who knew?

I'm a fan of both Sheps so its cool to see them finally doing this. I remember them saying they wanted it out for E3, but ran out of time.

Lol, no. Seriously, play them both back-to-back

Also, they only now started doing that? Well, all in good time, I guess.

P.S. Mark Meer > Jennifer Hale. I can do that "obviously a better VA" stuff, too, you know. 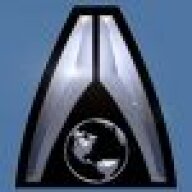 I don't play FemShep, but I still think this is great news.

Cool. It's nice to see a bit of two-way recognition.

Now, I'm gonna bail before this thread gets nasty.

But before I do, I'll just leave this here:

I don't like this, because it seems like a pointless thing. The gender of Shepard should not matter. By making trailers for both genders there putting a lot more importance on gender than I think they should be. I know it's just for publicity, since apparently some people can't tolerate anything with male Shepard for some reason, but I still don't like it.


The_root_of_all_evil said:
Bets on her cup size being at least an E, and generally fulfilling the 36-24-36 image?
Click to expand...

Come on, we know Bioware treats all their female characters with enough respect to not sexualize them. I mean just look at Miranda!

In all seriousness that's one of the things that always struck me as odd about Mass Effect 2. Bioware doesn't seem to sexualize women but Miranda is handled horribly in that regard. 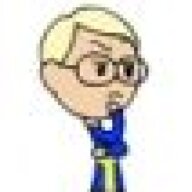 Coulnt stand Mark Meer's male Shepard in either ME1 or 2 which is why Ive only finished the game as female. This is getting two thumbs up from me!

RT-Medic-with-shotgun said:
Quality overrides opinion so your opinion shares the same result as the actual quality. meer is not a BAD voice actor but Hale delivers the character she plays better.
Click to expand...

I just wish they'd had the good sense to model the default ManShep after Mark Meer rather than Mark Vanderloo. I might be more inclined to play ManShep that way.

Also, I know Meer is a good voice actor from other roles, but his voice in ME2 just doesn't work for me. (I liked him better in ME1, though.)

Im more excited that Femshep is appearing on the cover of the special edition, anyone got a source for that?