Overhaul Games' upcoming Baldur's Gate: Enhanced Edition is going mobile, and we've got the screenshots to prove it.

It wasn't too long ago that the mysterious countdown timer on BaldursGate.com ran to its end, culminating in the announcement of Overhaul Games' upcoming Baldur's Gate: Enhanced Edition. There wasn't much info available at first, but eventually we learned that its retooling of 1998's milestone RPG is set to include updated graphics, the inclusion of modern elements, a fresh set of quests, an unfamiliar party member, and now, a new home: Apple's iPad.

Yes, yes, you can still grab the game for PC and old-school your way through Faerûn, but those interested in exploring the lands with finger taps in place of clicks will now be given the chance to purchase on iOS this summer when the game is released. Content included in the iPad release seems to be the same as on PC, which Overhaul Games describes as "the entire Baldur's Gate adventure, the Tales of the Sword Coast expansion pack, and never before seen content including a new adventure and new party member."

The announcement also comes with a set of the first screenshots we've seen for the game's Enhanced Edition. It's difficult to see much of import, but at least one of them seems to give a clear shot of what appears to be newly designed character models. The resolution also seems much higher than the original game supported, while the party members are shown more rounded and crisp. Other than that, things look pretty familiar.

Though some may find such a port borderline blasphemous, the mechanics of a standard isometric RPG actually seem right at home on a touch device (as opposed to so many of the cockamamie "virtual controller" rig jobs we see on there for console games). Personally, I'm game for any excuse to pick up the old classic again, and if that happens to come with a new way of interacting with it as well? All the better. Is it too soon to starting hoping for a similar treatment for Fallout 1 and 2?

I really cant tell any difference between this and BGII. 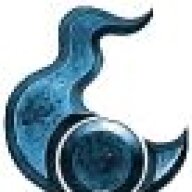 This... would actually be rather cool

Although my first thought was along the lines of: "Blasphemy!"
It seems pretty cool to play BG on the bus, train or wherever.

A few questions though:

-How will it manage the pause button?
-BG:II as well or just BG?
(It wasn't specified so I began to wonder. Man, I'm getting picky these days.)
-Will it be exclusive to the iPad?
EDIT: I meant will it be for Android? Iphone? etc. I know it'll be on PC

Now, if only I could speed up time so I don't have to wait anymore for all of this to be released.

Vornek said:
-Will it be exclusive to the iPad?
Click to expand...

it does say in the article that it's not ipad exclusive, just that it will be released for it too

I can't wait to give it a shot. There'll definitely be loads of bang for my buck, and it's the type of game that seems really suited to tablets.

The game looks no different from BG2 hmm.

So they finally found a use for the Ipad...Even though you can have touch-screen on the PC, Microsoft failed twice for a reason.

Considering the biggest issue I had with BG and BG II is that I couldn't get it to run on my computer without looking like shit (or now with my new computer it just won't work) I'm REAAAAAAAAAAAAALLY looking forward to this. I'll finally be able to see what all the hubub was about. I hope.

What I did get to play kinda... bored me. But it was barely into it.

Gonna finally give it a worthy try this time.

This... Is actually a pretty good idea. The control scheme and gameplay actually pretty much perfectly adapts to the iPad. Also, it would be hella awesome to play some BG between classes or whatever. Now, to get an iPad...
A

Vornek said:
Although my first thought was along the lines of: "Blasphemy!"
-V
Click to expand...

I can do that for you Blasphemy! No, no, no... This isn't road that should be taken. A deflection from the goal!
V

Unless this winds up being playable on the Kindle Fire I'm not all that interested. I'm sure Apple users will be happy though.

Hurraaaay, finally some screenshots! Hmmm, doesn't seem like much of an upgrade, but than again I didn't expect any miracles. I could never get those widescreen mods to work on my game, so this still looks better.
Don't mind the new platform. Whatever helps them introduce this game to more people without sacrificing core RPG elements is perfectly fine and any extra cash could help them make BG3 (for better or for worse).

One of the greatest RPGs of all time is now...an app on a IPad.

How the mighty have fallen.

Jove said:
One of the greatest RPGs of all time is now...an app on a IPad.

People have been playing Baldur's Gate on the iPad(and Android, albeit without multitouch support yet)) for a while now. Look up GemRB. If you already have the games, you can play them on multiple platforms now. The only reason to buy BGEE will be the enhancements, if they turn out to be worthwhile.

Vornek said:
This... would actually be rather cool

Although my first thought was along the lines of: "Blasphemy!"
It seems pretty cool to play BG on the bus, train or wherever.

A few questions though:

-How will it manage the pause button?
-BG:II as well or just BG?
(It wasn't specified so I began to wonder. Man, I'm getting picky these days.)
-Will it be exclusive to the iPad?

Now, if only I could speed up time so I don't have to wait anymore for all of this to be released.

Both BG and BG2 including all expansions + new content

I hope these aren't the final versions of the "updated graphics", until more screens appear (or someone enlightens me) I'll just believe they aren't.

Also: a pretty neat idea if you ask me.

Jesus Christ, Mike, don't scare the hell out of me with titles like that, I thought you meant it was going to be ipad exclusive.

Hmmm... I may need to reconsider my lack of ipad status...
K

What is it with you people who piss all over Baldur's Gate coming to the iPad? You obviously don't own iPads, so what the hell do you care?