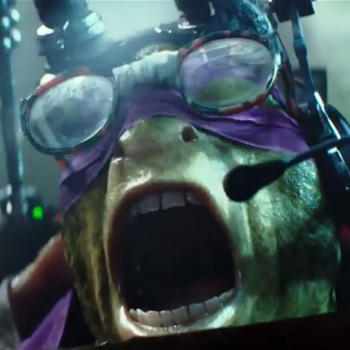 Industry number-watchers have their eyes on this weekend's box-office totals, looking to see if one of the best-reviewed blockbusters of Summer 2014 could hold onto it's #1 spot for a second week against a challenge from one of the year's worst-reviewed blockbusters. Now, with Friday's numbers coming in, it's looking like the critical-dud is coming out on top with audiences.

Projected to open in the $40 million range for the weekend (which had many analysts predicting that the Marvel Studio's mega-hit itching for a sequel. [http://www.escapistmagazine.com/videos/view/escape-to-the-movies/9615-Guardians-of-the-Galaxy-Surprise-This-Movie-Rocks]

Turtles' big take almost certainly guarantees that Paramount Pictures, Nickelodeon and Michael Bay's Platinum Dunes company have a new moneymaking franchise on their hands (three previous TMNT features and one animated installment were released by Warner Bros and New Line Cinema.) The industry as a whole will be happy to see this weekend's box-office up 15% from last year overall; though analysts are anxious to see how next weekend's big opener, Expendables 3, will endure the high-profile leak of the entire completed film [http://www.escapistmagazine.com/news/view/136602-Lionsgate-Waging-a-Legal-War-Over-Expendables-3-Internet-Leak] to piracy sites several weeks ago.

The OP pic pretty much sums up my feelings.

I'm sorry, but was anyone really surprised at this? sure it's incredibly shitty that a terrible movie has overtaken a great movie, it's a nostalgia property though so it was -ALWAYS- going to make money and yes we'll probably see sequels to it and every time it'll get worse reviews and it'll still make money just like every transformers movie.

at this point you could remake Tommy Wiseau's the Room with turtles and it'd still make money.... actually that'd be hilarious, they should do it for the sequel.
D

Michael Bay squats out another turd, people lap it up and taste of the human race continues to depress me.

I think everybody had already gone to see Guardians, so there wasn't anything else for people to watch this weekend.

Reminds me of Grown Ups 2 beating out Pacific Rim on the opening weekend last year.

I cannot believe this. Guardians was by far the superior movie and yet something worse than a turd thrown onto a cinema screen by a 2 year old and called a movie managed to beat it...

What the hell is wrong with this industry?

I predict GotG will stay in the top five movies for a while. Turtles will take a big drop next week.
E

To be fair the real question is whether or not TMNT will hold that position?

It may hold it for the weekend but drop off as people see it and bad word of mouth circulates.
S

I know that the opening weekend is always looked at for potential success, but it could still turn out like ASM2 and the amount drops significantly the next weekend. If it does and overall performance is lower than they expected, then maybe there won't be a sequel? I only assume it could happen for this one because it's only the first movie, unlike Spider Man which was a second movie with a clear future of the franchise.

I'm not really surprised, the Turtles have been a household name for ages, and I'd certainly never heard of GotG before hearing about the movie. As a kid if I got asked which one I'd rather see this weekend it'd be the Turtles, and I'm sure it must have been the same for families all over. Kids are gonna enjoy the movie no matter what, despite whether or not they 'deserved better' as Moviebob puts it. As for the adults well any that are with families are probably seeing Turtles this weekend because it's more likely what the kids want, and any others saw GotG last week anyway so it makes sense that Turtles made money.
G

I guess a series with such a great fanbase as the Turtles was always going to be a hit in the money making way.
Guardians is an unknown IP, and many people don't hang around the internet to get to know about movies before they go and watch them, so they just see "Turtles" --> go watch! Based on earlier experiences.
I wasn't going anyway since all I know about turtles is that one SNES game I had as a kid, but it was loads of fun
E

It's not available yet in my country but if it was, I'd go see it regardless of reviews if only to see how bad it is.

Curiosity is a powerful seductress.

Er...what? Please dont let that be true. While I found pacific rim to be a tad disappointing...grown ups 2 is probably the worst comedy I've seen in my entire life, and I usually like Sandlers movies, and I ADORE David Spade....but grown ups 2...holy crap what a trainwreck...

OT: Really humanity? REALLY? I just. Shit. How the hell are we EVER gonna get rid of this garbage if people keep buying it!?

To be fair, Guardians made $100 million in it's opening week, Turtles has opened with $60 million, so Turtles technically hasn't beaten it, and Guardians made $42 this week (it's second week) so it will be very telling how much Turtles makes in it's second week since that number will almost certainly be a lot less than $42 million

When I first heard about who was producing this abomination reboot, a few questions did come to mind.

ExtraDebit said:
It's not available yet in my country but if it was, I'd go see it regardless of reviews if only to see how bad it is.

Yeah me too, stupid films releasing at different times in different countries. Same thing happened with the Lego movie.

It's the average joes who are at fault (don't check the reviews beforehand or go see it cos the children demand for it).

Goes to shows the general publics ALWAYS dominate the box office. Afterall this is why we got Expendable beating Scott Pilgrim Vs The Worlds and Grown Ups 2 beating Pacific Rim.

I can't help but feel as though complaining about this is a double-edged sword.

You're either one of the people who has seen the film (therefore partially responsible for it's numbers), or you're complaining about a movie you've never seen.
Z

not that i'm surprised by this, but is has got me thinking

who IS actually seeing these movies? I mean maybe I'm talking from a bubble here since myself and my friend group and such did not see (nor really have any intention of seeing) this or any Bay movie.

there is one guy i know who dose see all his movies (he's really only an aquatence through one of my LAN friends) and he's the kinda guy who shrugged and said "bummer" when the Doc's told him he had diabetes.

I mean, I cant be one of the smart ones right? (hell i'm average at best). it has to be something more to this like some sort of "the movie guys behind bay are just saying its a hit over and over so that they can convice people its a good movie and get money from....something" I dunno but not "the majority of people in the world are like this guy"