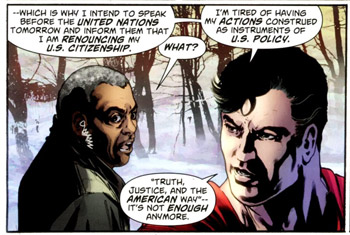 A Superman story with an unusually overt political theme has some Conservative comic book fans up in arms.

Superman's classic line about "truth, justice, and the American way" is going to need a little tweaking, as in Action Comics #900, he renounces his US citizenship to take a more global prospective. This news has not gone down well in some quarters, especially with readers of Fox News' Nation blog.

Issue #900 actually contains a number of different stories, even one where Superman fights an actual god, but it was a politically charged piece by Batman Begins writer David S. Goyer that has people upset. In it, Superman intervenes in a anti-government riot in Tehran, Iran's capital city. He protects the protestors from Iran's army through what is described as, "an act of non-violent protest."

The story is unusual in that is uses real places and people - Iran's president Mahmoud Ahmadinejad appears in the story - rather than stand-ins. After protecting the protestors, Superman returns home where he is confronted by US Government officials. It's there he reveals his intention to give up his US citizenship, saying that the world is too small for him to be tied to any one country, and that he was tired of having his actions seen as "instruments of US policy."

Fox News wrote about the story twice, once in long form its main blog [http://www.foxnews.com/entertainment/2011/04/28/superman-renounces-citizenship-00th-issue/#content], and a short synopsis on its Nation blog [http://nation.foxnews.com/comic-books/2011/04/28/superman-renounces-his-us-citizenship], which linked to a story written by Wired [http://www.wired.com/underwire/2011/04/action-comics-900/?pid=3519]. Despite what you might expect a Fox News piece on Superman turning his back on the country that had given him so much to be like, both pieces are incredibly even handed, free from the hysteria and half-truths that characterized its Bulletstorm coverage [http://www.escapistmagazine.com/news/view/107628-Fox-News-Says-Bulletstorm-Could-Make-You-a-Rapist].

In the articles' comment sections, however, it's a different story. Many readers are upset with the story, which they perceive to be an effort by left-leaning writers to push their agenda, using Superman as a platform. "The liberal, America hating scumbags who now run DC Comics are just adding another feather in their cap with yet more anti-American culture and tradition jihad. F--k 'em," wrote one commenter. "This is why I don't go to movies or even rent anymore. I'm not making the left loons of Hollywood any richer to support their campaign of American hate," added another.

DC co-publishers Jim Lee and Dan DiDio were diplomatic about the story, issuing a statement seemingly intended to support it, while at the same time, placating its detractors. In it, they said that that Superman embodied the very best traits of "the America Way," and that despite his new, global focus he would remain true to his roots as a farm boy from Kansas. Unfortunately, it seems unlikely that this measured response will be enough to mollify those who see this as a betrayal of what the character used to stand for.

I love how Superman, a character who wasn't even born on this planet, not being American is considered 'anti-American'. I wonder if people who think that are the same people who think Obama isn't American enough to be president.

It's Dan Didio, not Paul Didio.

...Wow, A FOX article that isn't complte BS and lies? I am impressed. Though the comments are just so funny that is sad.
K

First off, the Fox News thing didn't even need to be mentioned. Secondly, this is a rather stupid story. Though glad to see DC using real people instead of stand ins. As much as I think this story is lame, nothing will ever be more blatantly political as Spiderman playing basketball with Obama. As long as we don't see Superman giving a piggy back ride to Cheney or the Obama kids.

It's Dan Didio, not Paul Didio.
Click to expand...

So it is. Fixed, and thanks for the heads up.

GiantRaven said:
I love how Superman, a character who wasn't even born on this planet, not being American is considered 'anti-American'.
Click to expand...

Nominally...most of the time his bakstory is irrelevant and he's very much a USAlien, no pun intended.

I'm no expert but I seem to recall Linkara or someone saying that Superman quit America during the Nixon and Reagan administrations as well.

To summarize my thoughts on a Superhero wanting to protect the innocent all around the world rather than just the "Land of the Free"...

In regards to the reaction, I'm not surprised and I don't even care. I think I lost all faith in half the citizens of America when I saw Borat.

Oh please. Now these idiots realize the comic book industry is liberal? That's almost like coming to the epiphany that Stephen Colbert, is in fact, not on Bill O'Reilly's side. 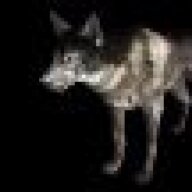 Superman comics doing something smart for a change, making sense, and Fox News readers get hysterical.
...there are so many horrible things i want to say, but i'm not sure if my probation is up yet. So i'll just leave it at this: Fox News, this is your fault. You bred this generation of ignorant bastards. If they end up sparking World War 3, i'll be sure to remind any survivors that it's your fault. 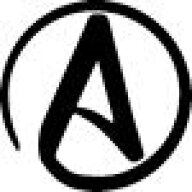 has clark kent give up his us citizenship too? if no then wtf is the point?

Thomas Guy said:
First off, the Fox News thing didn't even need to be mentioned. Secondly, this is a rather stupid story.
Click to expand...

Predictably, I disagree. It's interesting, and it puts the story in context. As for it being stupid, again, I disgaree, but I'm curious about why you think that.

GiantRaven said:
I love how Superman, a character who wasn't even born on this planet, not being American is considered 'anti-American'. I wonder if people who think that are the same people who think Obama isn't American enough to be president.

It's Dan Didio, not Paul Didio.
Click to expand...

Especially since his character is a Canadian creation.

I don't understand how according to alot of Americans it seems that they are the only country that stands for peace and freedom. The freedom part I find ironic with the amount of privacy infringing bills that the previous US government tried to pass.

Pardon my ignorance on approximately 60 years worth of Superman lore, but wasn't the dude with the most obvious disguise NOT born in the US, or even on this planet? So why pray tell would he have to limit his actions to one specific geographic region when he can fly?
Oh wait, I'm reading too much into this. Simple fact is, Fox is retarded, people who comment on stories or worse youtube are generally insufferable cretins (not us, of course *shifty eyes*), so it would logically follow that people who comment on Fox things are retarded insufferable cretins.

And why is everyone pissed over a COMIC again?
Really?..
G

Love it, Now that superman will protect the UK I can sleep easier.

This would be quite funny, if it wasn't a much smaller part of that whole "GOD LOVES AMERICA THE MOST" phenomenon that those stupid twats wank themselves silly over.

thaluikhain said:
Nominally...most of the time his bakstory is irrelevant and he's very much a USAlien, no pun intended.
Click to expand...

Let's say Krypton was, for example, Mexico. Mexico blew up and Mexican Baby Supes ended up in Smallville, Kansas. Nothing else is changed, he's still given the same boy scout values and grows up to be the Superman we all love; would the people getting all up in arms about this still claim it was anti-American? Somehow, I doubt it.


cWg | Konka said:
has clark kent give up his us citizenship too? if no then wtf is the point?
Click to expand...

Clark Kent and Superman, despite being the same person, are essentially completely different entities. There's absolutely no reason why Clark Kent would renounce his citizenship. Supes doesn't need to do that, as the renouncement was to avoid the political fallout of operating in different countries, not as a statement of 'America is bad' or some such. 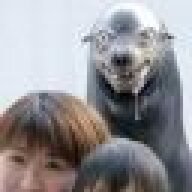 There's 360 million people living in the US. Some of them are bound to be idiots, and those are bound to comment on Fox News.